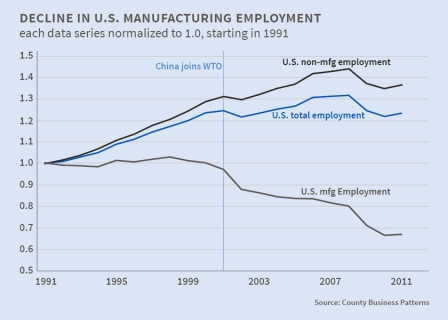 U.S. manufacturers that were heavily exposed to Chinese competition in 1999-2007 continued to see rapid job losses even when competitive pressure eased.

In Import Competition and the Great U.S. Employment Sag of the 2000s (NBER Working Paper No. 20395), Daron Acemoglu, David Autor, David Dorn, Gordon H. Hanson, and Brendan Price determine that, from 1999 to 2011, Americans experienced net job losses of 2 to 2.4 million due to the rise in import competition from China. Analyzing changes in employment across four-digit manufacturing industries from 1991 to 2011, the researchers find that total U.S. manufacturing employment declined from 17.2 million workers in 1999 to 11.4 million in 2011, and that Chinese imports were responsible for approximately 10 percent of that job loss.

These direct effects, however, do not reveal the full impact of growing Chinese imports on U.S. employment, such as is seen in industry input-output linkages. If an industry contracts because of Chinese competition, it may reduce both its demand for intermediate inputs produced in the United States and its supply of inputs to other domestic industries. An industry may thus be negatively affected by trade shocks either to its upstream domestic suppliers or to its downstream domestic buyers. The authors consider that increased imports in upstream industries may lower the cost of obtaining certain inputs, making the implications of the negative upstream trade shock ambiguous. Consistent with these observations, they find that industries contract when their downstream buyers are exposed to fiercer import competition. Accounting for such downstream linkages doubles the estimated impact of Chinese imports on U.S. manufacturing employment and reveals an equally large effect on employment outside of manufacturing.

Import competition can affect employment through other mechanisms, as well. The authors look at local labor markets to study the reallocation effect from growing trade with China, in which declining manufacturers move to new opportunities, and study aggregate demand effects by which domestic consumption and investment may be depressed, extending employment losses to sectors not otherwise exposed to import competition. If the reallocation mechanism often postulated in economic theory is operative, the authors write, then if an industry contracts in a local labor market because of Chinese competition, some other industry in the same labor market should expand. In addition, part of any aggregate demand spillovers also should accrue to the local labor market. But they find few if any offsetting job gains in non-exposed industries.

U.S. imports from China dropped sharply in 2009, the researchers note, possibly implying that China absorbed part of the demand shock accompanying the Great Recession. Yet they find that U.S. manufacturers that were heavily exposed to Chinese competition during the period 1999 to 2007 continued to see rapid job losses during the period 2007 to 2011. This suggests that the trade shocks of the prior decade cast a long shadow over U.S. manufacturing, even when competitive pressure eased temporarily. U.S. manufacturers, the authors say, recognized that the loss in advantage over China in the prior decade was largely permanent and that the lull in trading activity was temporary. Indeed, U.S. imports from China more than made up all of the ground lost in 2009 by the following year, and then rose further from there. The researchers conclude that while rising labor costs in China suggest less trade pressure in the years ahead, the U.S. has yet to experience such a reduction. 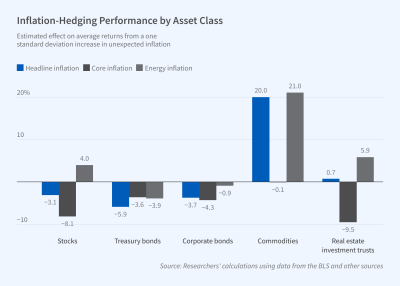 Import Competition and the Great U.S. Employment Sag of the 2000s