Is the US Productivity Slowdown a Mirage? 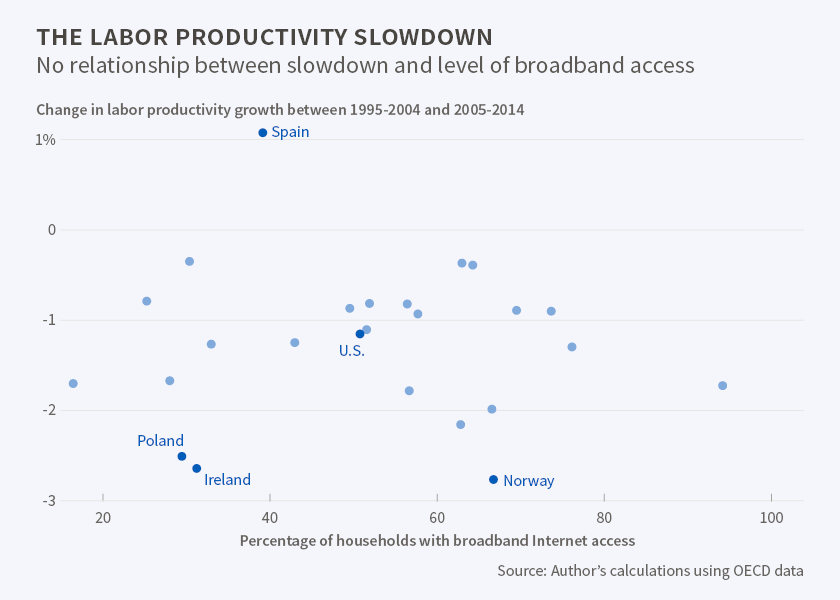 Mismeasurement of the prices and quantities of digital goods and services cannot account for the decline in the growth of labor productivity.

Labor productivity in the United States—defined as total output divided by total hours of labor—has been increasing for over a century and continues to increase today. However, its growth rate has fallen. One explanation for this phenomenon focuses on measurement difficulties, in particular the possibility that current tools for measuring economic growth do not fully capture recent advances in the goods and services associated with digital communications technology.

In Challenges to Mismeasurement Explanations for the U.S. Productivity Slowdown (NBER Working Paper 21974), Chad Syverson considers and ultimately rejects the claim that the productivity slowdown is merely an artifact of bad measurement.

Syverson points out that there is a large gap between current estimates of output and counterfactual estimates of what output would have been in the absence of a productivity slowdown. Between 1995 and 2004, for example, labor productivity grew by 2.8 percent per year on average. During the 2005-15 period, the annual growth rate fell to 1.3 percent. Had labor productivity growth continued at its prior pace, there would have been an additional $2.7 trillion in gross domestic product in 2015—a 15 percent increase. For mismeasurement to explain this gap, it would need to account for $2.7 trillion in unmeasured output, or approximately $21,900 per household.

One reason some analysts believe that labor productivity is understated is that price inflation may be overstated for digital goods and services. If this were the case, information and communications technology (ICT) industries would be growing faster in real terms than the official statistics indicate. Syverson agrees that inflation is difficult to measure for goods whose quality is rapidly improving, but argues that this hypothesis is difficult to square with the fact that—looking both across countries and across states—there is no relationship between the degree of slowdown in labor productivity and the size of an area's ICT sector.

A related way in which measured productivity growth could decelerate would be if output growth became a worse proxy for growth in economic value. This could happen if new goods and services that people value greatly were for some reason sold at low prices, or even given away, as some argue is the case for many ICT products. If consumers spend less money on digital goods but receive greater utility from them, official statistics may show sluggish growth in output even though aggregate welfare is rapidly improving. However, Syverson surveys existing research on the economic value generated by the Internet and concludes that most estimates fall short of the missing $2.7 trillion in output by at least an order of magnitude, and that even the most generous estimates leave two-thirds of the gap unexplained.

Also, Syverson reasons, if many products are being sold at unusually low prices, then measures of total income (which include the wages paid to workers who make these products) should be systematically higher than gross domestic product (which includes consumer spending on such products), even though the two metrics would be equal absent measurement issues. But while total income has been on average higher than gross domestic product lately, it was already higher before the productivity growth slowdown started. Furthermore, total income is not higher for the reason the mismeasurement hypothesis predicts. Instead of there being unusually high labor income because workers are paid to make relatively inexpensive valuable goods, the data show unusually high income from corporate profits, exactly the opposite of what would be expected if companies were systematically underpricing products relative to their true economic value.

Syverson concludes that the productivity slowdown likely reflects a real change in the rate of economic progress.

Challenges to Mismeasurement Explanations for the U.S. Productivity Slowdown